We want your vehicle! Get the best value for your trade-in!

Email for Mileage
Apply for Financing 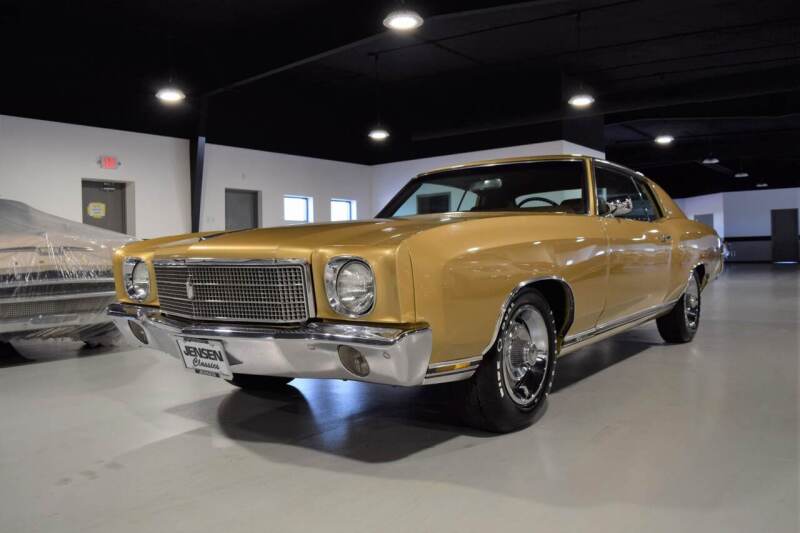 Ready to trade in?
Let us know what you have.
Have additional questions?
Give us a call and we'd be happy to help!

1970 Monte Carlo GM’s design studios took adecidedly formal turn in the Seventies, led by large coupes such as the GrandPrix and Monte Carlo. Although they didn’t have the semi-fastback aesthetic ofmany Sixties’-era models, they nonetheless carried spot-on and timelesslong-nose/short-deck proportions. This 1970 Chevrolet Monte Carlo exemplifies the strong styling established withthe new design trend. According to the previous owner, its original 350 enginehas been replaced with a big-torque 496-inch big-block stroker engine that’sbacked with a four-speed transmission. It’s reported to be an originalCalifornia car, owned by the seller for 20 years — and owned by a personalfriend for the 18 years before that. The seller says the two timeframes add upto 38 years of covered, heated storage for this first-year Monte Carlo, addingthat the car “needs nothing.” POWERTRAIN Originally equipped with a 350-cu.in. V-8 and a Turbo HydraMatic350 automatic transmission, the original powertrain has been changed to a “pumpgas” 496-cubic-inch big block, with a four-barrel carburetor, iron heads andfactory-style exhaust manifolds, which flow into stainless steel mufflers andfactory-style SS exhaust outlets. All of its torque is channeled through a SuperT10 four-speed transmission, the conversion of which was reportedly completedwith all correct, NOS components. It’s a wide-ratio gearbox, with a 2.50 firstgear and a Hurst shifter. It’s linked to a 12-bolt rear axle, with a Posi unitand 3.55 gears. There are no reported leaks with the powertrain and thetransmission is said to shift smoothly. EXTERIOR According to the previous owner, this Monte Carlo wasrepainted the correct gold color in 2019. The refinish included soda-blastingwhat is described as “perfect, rust-free” sheet metal. There are no reportedblemishes or swirl marks in the finish and the exterior trim appears to be invery good condition. There are no reported cracks or chips in the glass,either. CHASSIS According to the previous owner, the chassis,suspension and brake components are in very good condition, with upgrades andrecent service including urethane body mounts, heavy-duty rear control arms anda stabilizer bar. There are no reported issues or needs with the steering or brakingsystems. The car rolls on new reproduction Firestone Wide Oval radial tires,which are mounted on factory 15-inch Rally wheels. Turnkey, gorgeous and extremely powerful, best of bothworlds. The equipment consists offactory air conditioning, power steering, power brakes, disc in the front, drumin the rear, tachometer and a full array of gauges, tilt steering wheel,factory A.M. radio, driver side remote mirror and more.

By placing this call you agree to the Terms and Conditions of Use of this website and that this call may be recorded by Jensen's Dealerships, using technology powered by Carsforsale.com, for business purposes.

Enter your phone number or email address to receive this VIN

Success! Your message has been sent.

Uh oh! There was an error sending your message. Please try again in a few moments.

By placing this call you agree to the Terms and Conditions of Use of this website and that this call may be recorded by Jensen's Dealerships, using technology powered by Carsforsale.com, for business purposes.